A recent national survey shows that among young people age 12 to 20 underage drinking and binge drinking have declined significantly over the past decade.(1) While the survey report does not speculate about the reason for this trend, it is the result of decades of cumulative widespread prevention messages coupled with concerns about alcohol-related motor vehicle crashes, alcohol poisoning, and sexual assault, and as well as increased alcohol taxes.(2) In the last decade tobacco use has also declined among youth. This reflects the lasting national impact of the 1964 Surgeon General’s report Smoking and Health(3)that was widely publicized and resulted in a law mandating warning labeling on all tobacco products. The report brought to the public’s attention the devastating impact of tobacco use on health. The national anti-smoking campaign has been strident in labeling nicotine as “addicting” and smokers as “addicted.”

Interestingly, use of illegal substances by adolescents has also declined. These three trend lines showing broad declines are significant. They cannot be explained on a substance-by-substance basis because the trend lines for alcohol, tobacco and other drugs are so similar. Instead this broad positive trend can be understood as part of a shared cultural learning initiated by the epidemic of substance abuse that exploded in the late 1960s and early 1970s. In the 50 years since the 1964 report on Smoking and Heath, there has been a growing awareness of the negative health and safety effects of addicting drug use. One of the contributors to this cultural learning has been the definition of alcohol and nicotine as “addicting” drugs. This connection has been reinforced by the federal government’s descriptive terminology that linked alcohol to illegal drugs under the mantra-like phrase “alcohol and other drugs.”(4)

New analysis of longitudinal data from the nationally representative annual Monitoring the Future study on substance use by high school students shows a remarkably strong and sustained trend of abstinence from the use of all addicting substances. 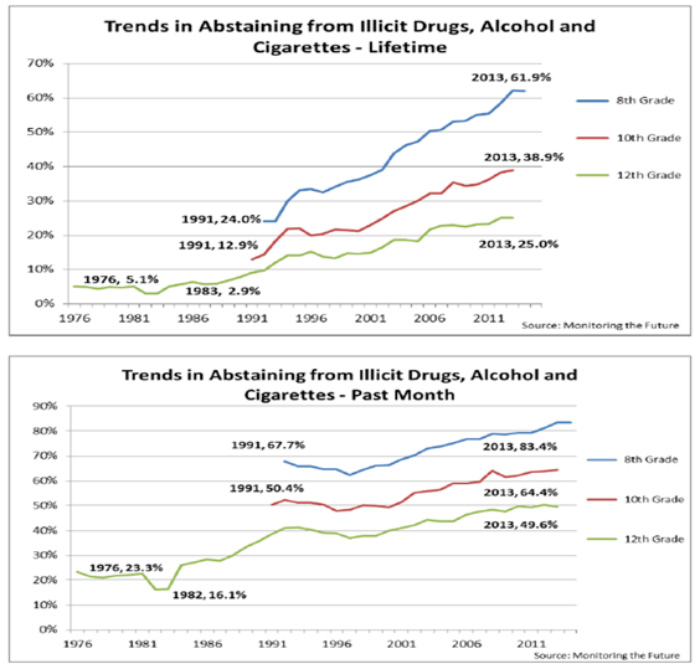 Problems with alcohol, tobacco, and other drugs remain gravely serious. However, this new evidence of an increasing percentage of American youth who choose not to use any of these addicting substances gives new hope for the future.

This finding has the potential to reshape all prevention strategies away from substance-specific health-promoting campaigns to a single focus that promotes no use by adolescents of any addicting substances. The use of any and all of these substances is unhealthy for youth and the use of all of these drugs is illegal. (The legal age for tobacco is 18, for alcohol 21, and in the states with legal marijuana, 21). Since nearly all substance use, and addiction, begins during the teenage years, prevention of any use during this time is singularly important. Lowering the substance use rates of youth today will be reflected tomorrow in lowering the adult rates of addicting drug use.

The new focus on one decision by youth not to use any addicting substances, including alcohol, tobacco, marijuana and other drugs, holds great promise of a stronger, clearer and more effective goal for public education and prevention.