Teens are doing it. Here’s what you should know.

Vaping is the act of inhaling and exhaling the water vapor produced by an electric device called vaporizer. Currently, the most popular devices used by teens are e-cigarettes, hookahs and hookah pens.

Dripping refers to the practice of applying nicotine liquid directly to the heated coils of an e-cigarette or other vaporizer to produce thick clouds of nicotine vapor. A new Yale University study of high school students in Connecticut, published in the journal Pediatrics, suggested that the approach was gaining favor among teenagers as a way to produce more flavorful clouds of vapor and “a stronger throat hit.”

Of the teenagers who reported using e-cigarettes, about a fourth said they had hacked the devices to allow dripping. Manufacturers, he added, have already caught on to the dripping trend and created vaping devices that feature exposed coils, allowing users easier access to drip their liquid manually.

According to the National Institute on Drug Abuse (NIDA), electronic cigarettes (also called e-cigarettes or electronic nicotine delivery systems) are battery-operated devices designed to deliver nicotine with flavorings and other chemicals to users in vapor instead of smoke. A battery powers a heating element that vaporizes the liquid nicotine contained within a cartridge in the e-cigarette so that what is inhaled and then exhaled looks like smoke, but is odorless.

E-cigarettes often come in colorful packaging and have flavors marketed to young people such as strawberry, apple, bubblegum, or watermelon. They can be manufactured to resemble traditional tobacco cigarettes, cigars or pipes, or even everyday items like pens or USB memory sticks; newer devices, such as those with fillable tanks, may look different. More than 250 different e-cigarette brands are currently on the market. One of the most popular brands right now is JUUL. There is a website that can easily be accessed by teens with a credit card.

According to NIDA, it is difficult to determine whether e-cigarettes are safer than conventional cigarettes because there is insufficient information available about these products.
However, there are studies ongoing that suggest that there are health risks associated with using e-cigarettes. Two studies reported in the Science News suggest that e-cigarettes can lower immunity to flu and a 2016 study indicated that vaping may can make a user more susceptible to lung infections.

Cigarette smoking remains the leading preventable cause of sickness and mortality, responsible for over 400,000 deaths in the United States each year. The worst health consequences associated with smoking (e.g., cancer and heart disease) are linked to inhalation of tar and other chemicals produced by tobacco combustion; the pleasurable, reinforcing, and addictive properties of smoking are produced mostly by the nicotine contained in tobacco.

Although they do not produce tobacco smoke, e-cigarettes still contain nicotine and other potentially harmful chemicals. Nicotine is a highly addictive drug, and recent research suggests nicotine exposure may also prime the brain to become addicted to other substances. Also, testing of some e-cigarette products found the vapor to contain known carcinogens and toxic chemicals (such as formaldehyde and acetaldehyde), as well as potentially toxic metal nanoparticles from the vaporizing mechanism. The health consequences of repeated exposure to these chemicals are not yet clear.
Another worry is the refillable cartridges used by some e-cigarettes. Users may expose themselves to potentially toxic levels of nicotine when refilling them. Cartridges could also be filled with substances other than nicotine, thus possibly serving as a new and potentially dangerous way to deliver other drugs.

Teens are also using e-cigarettes for marijuana. Vaporizers give kids a better way to hide what they’re inhaling. “It’s so much easier to conceal e-cigarette pot use,” said Meghan Rabbitt Morean, an assistant professor at Oberlin College. “Everybody knows that characteristic smell of marijuana, but this vapor is different.” As a result, teenagers are using pot in a way that is much harder to detect.

Finally, and perhaps the issue that is of greatest concern is that in addition to the unknown health effects, early evidence suggests that e-cigarette use may serve as an introductory product for youth who then go on to use other tobacco products, including conventional cigarettes, which are known to cause disease and lead to premature death.

A recent study showed that students who have used e-cigarettes by the time they start 9th grade are more likely than others to start smoking traditional cigarettes and other smokable tobacco products within the next year (Rigotti, 2015). So as is indicated in the Monitoring the Future, 2016 graph below, more students start using e-cigarettes than smoking but the studies show that they are likely to move onto smoking cigarettes. 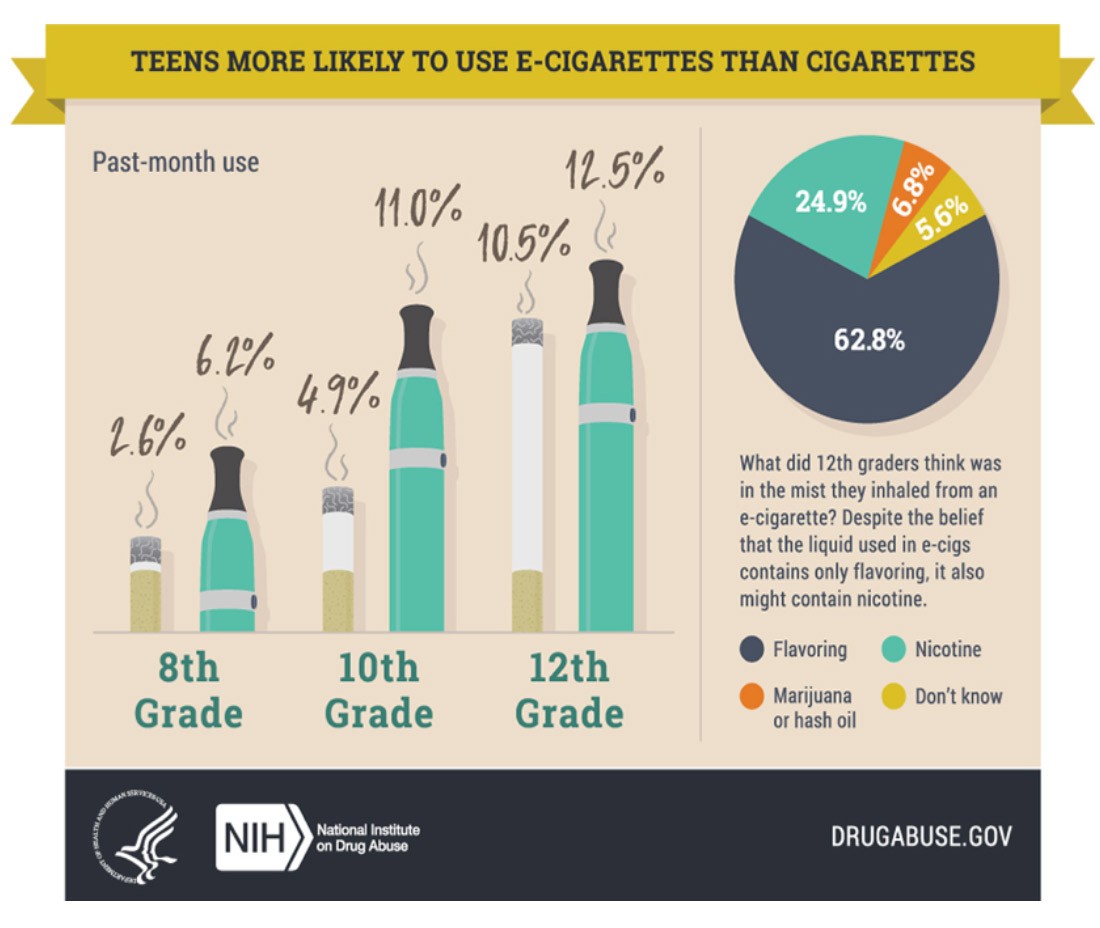 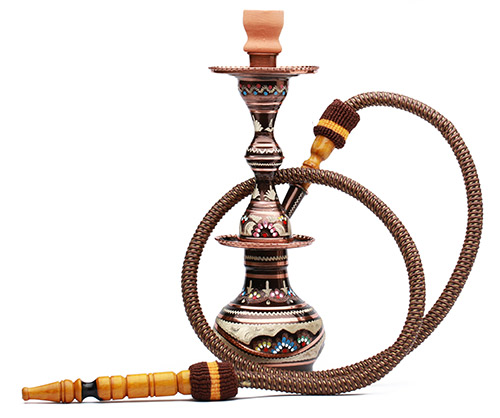 A traditional hookah is a type of water pipe. The tobacco burns in a small bowl. The smoke from the tobacco then travels through a water chamber and along a rubber hose to a mouthpiece. The smoker inhales through this mouthpiece.

Some people think that using a hookah is safer than smoking cigarettes since the water filters the smoke. That is not true. Hookah smoke still contains nicotine, an addictive drug that’s toxic in high amounts. Hookah smoke also contains other chemicals that can harm the body when they’re breathed deeply into your lungs.   Some studies suggest that hookah smoking could be even more dangerous than cigarettes because people often smoke at hookah bars for an hour or more.

Hookah pens are a sub-genre of hookahs and are like an e-cigarette but are called vape pens. Some disposable hookah pens vaporize a liquid that the makers claim has no nicotine, tobacco, or tar. This is hard to prove because the pens and liquids haven’t been studied or tested by independent research groups.

According to the Center for Disease Control, many hookah smokers may think this practice is less harmful than smoking cigarettes but hookah smoking has many of the same health risks as cigarette smoking. First hookah smoking delivers the highly addictive substance, nicotine to the user. The charcoal used to heat the tobacco produces high levels of carbon monoxide, metals and cancer-causing chemicals.

Because of the way a hookah is used, smokers may absorb more of the toxic substances also found in cigarette smoke than cigarette smokers do. An hour-long hookah smoking session involves 200 puffs, while smoking an average cigarette involves 20 puffs. (American Lung Association, 2017).

The amount of smoke inhaled during a typical hookah session is about 90,000 milliliters, compared with 500–600 ml inhaled when smoking a cigarette (CDC, 2016).

In addition, sharing the same mouth piece also increases the risk of infections such as herpes. There are also concerns about secondhand smoke as smoke from the tobacco and charcoal used in the hookah are health risks.

Hookah use by youth is significant. In 2016, the Monitoring the Future survey found that use of hookahs has remained steady at high levels since its inclusion in the survey in 2010. The past year use was reported by 22.9% of high school seniors.   Younger teens are more likely to use hookah sticks or pens which come in brightly colored pen shapes and have flavors that appeal to children and teens, have high levels of nicotine, and are inexpensive to purchase. 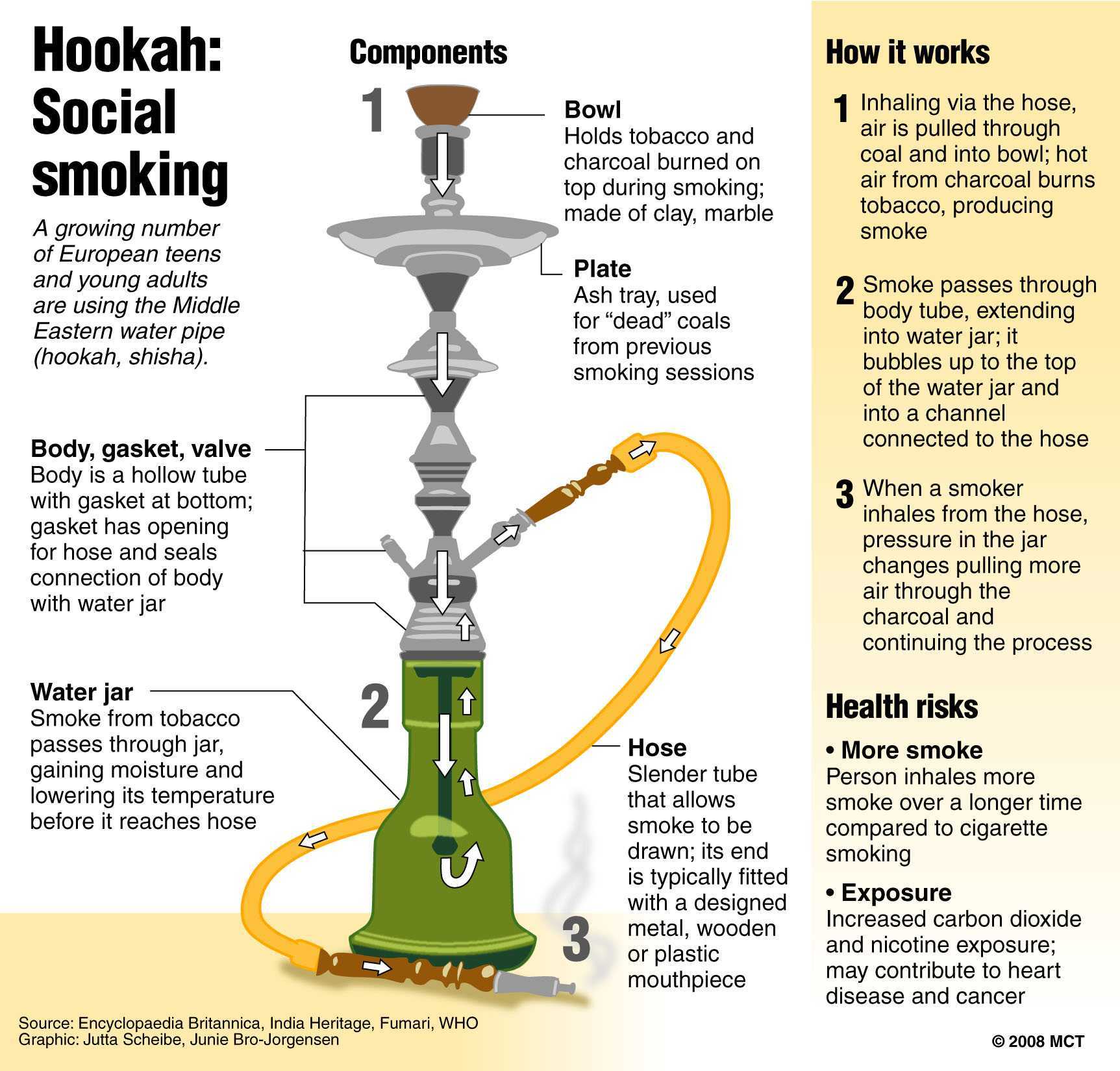